The Best easy vegan cinnamon rolls with cashew frosting. They’re soft, fluffy, and delicious. Furthermore, they’re healthier than the average cinnamon buns are because they contain no white sugar, no eggs and are dairy-free! Ideal for a snack, breakfast, or dessert. 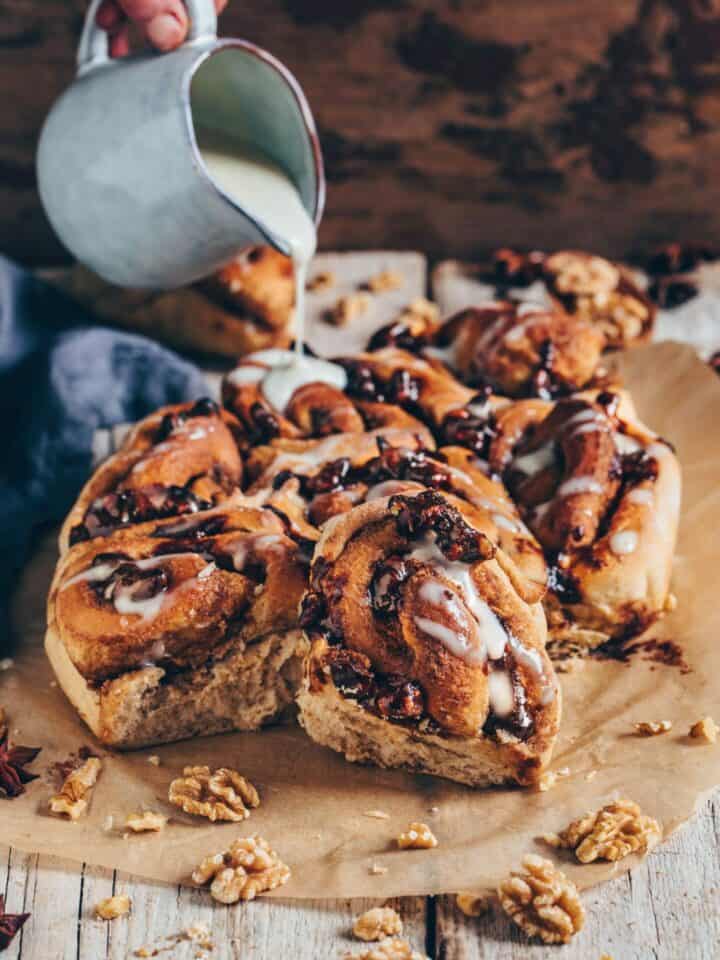 I don‘t know about you, but I need to make cinnamon rolls at least once a year. Preferably a homemade and healthier version of cinnamon rolls, which by the way are also incredibly delicious! Making it possible to enjoy more of them without a guilty conscience. For some reason I usually make them on St. Nicholas’s Day, so I thought that it would be a good idea to share the recipe with you today! Of course, you can make these delicious easy vegan cinnamon rolls any time, but maybe you also want to bake them on this holiday too. Obviously, vegan cinnamon buns are the perfect treat for Christmas time, and they come together super fast. I imagine that like me, you will probably have the required few simple ingredients on hand. The great thing about this recipe is that these easy vegan cinnamon rolls are much healthier than the ones you’re probably familiar with. Instead of conventional white sugar, I used coconut blossom sugar. The sugar extracted from coconut blossoms has a low glycemic index. This means that your blood sugar level rises slowly, making you feel satisfied longer. Maybe you know the problem with food cravings, which are caused by blood sugar fluctuations after consuming treats that are loaded with white sugar. If so, you know what I’m talking about. 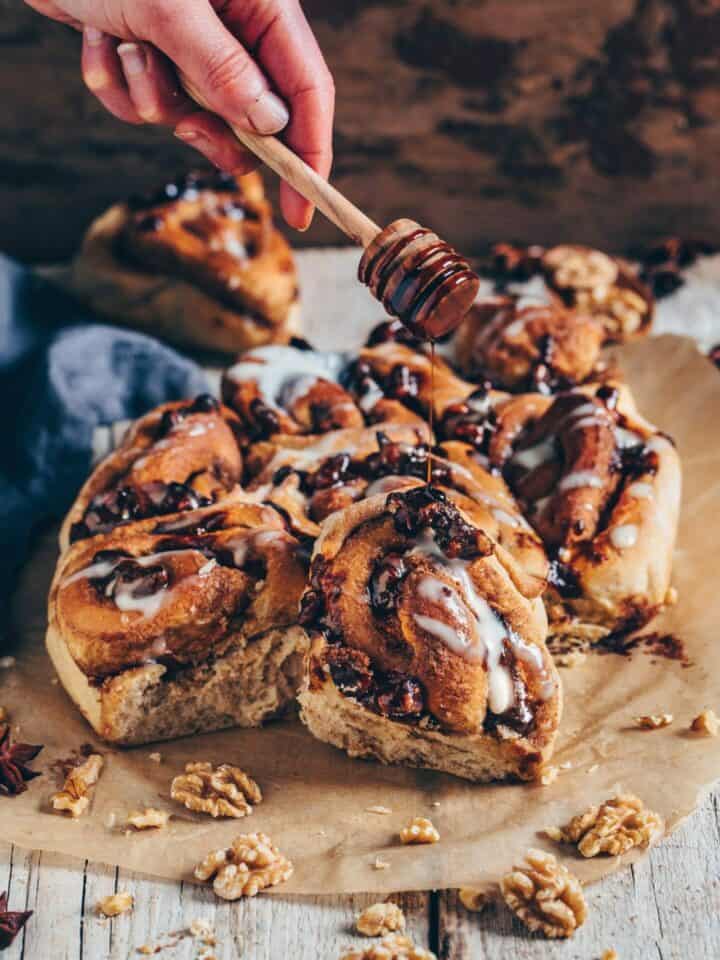 Incidentally, cinnamon rolls come from Sweden and are therefore also called “Swedish cinnamon rolls” or “Swedish cinnamon buns” or in the Swedish language “Kanelbullar”. But they’re also well known in America. Anyways, they taste incredibly delicious because they are so soft, fluffy, gooey, and have a flavorful cinnamon filling. That‘s why it‘s definitely worth it to make the yeast dough because the secret is in the chilling time. Besides the waiting time, they‘re made super fast and easy as you can see in the recipe video! Honestly, I’m personally not one of the most patient people, but for these cinnamon buns, I‘ll take the time. And trust me, once you’ve made yeast dough for the first time, you’ll be surprised how easy the preparation is! 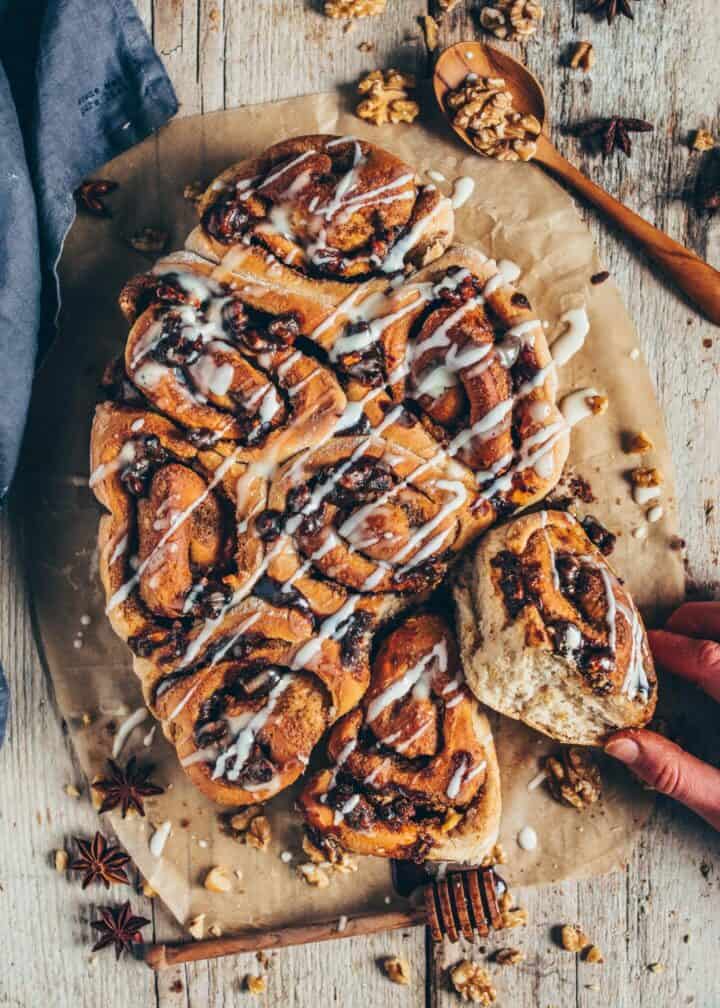 Similarly, the filling for these easy vegan cinnamon rolls is also mixed together quite easily and fast. It‘s only made of vegan butter, coconut sugar, coconut syrup, and cinnamon. I also like to add some chopped walnuts and raisins, but of course, that’s just an option. Feel free to keep these cinnamon rolls simple or get creative with the filling by adding cinnamon apples, vegan chocolate chips, different fruits, Christmas spices, nuts, or whatever you like.

Despite their filling, cinnamon buns are generally not overly sweet, but that’s a good thing because then you can smother them in delicious frosting. I made a healthier frosting with cashews and coconut which turned out really delicious! I think it tastes even much better than the simple classic frosting made of only powdered sugar, water, and a little lemon juice. 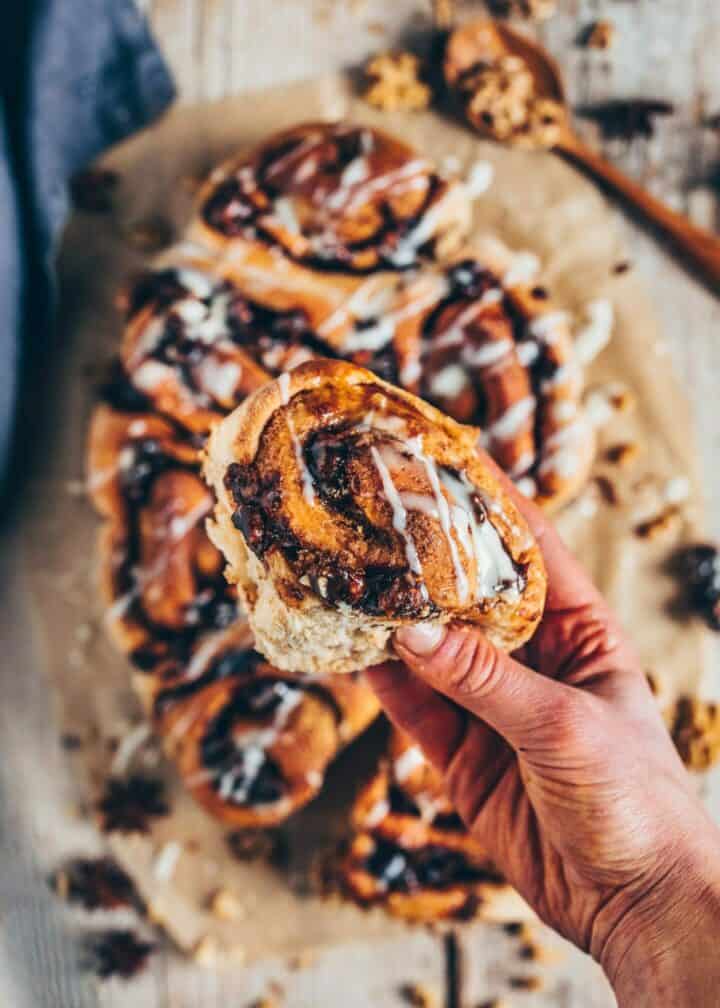 Use your favorite toppings

As I mentioned before, you can use any toppings you like for your easy vegan cinnamon rolls, like nuts or raisins for example. However, you can also enjoy the cinnamon rolls plain just like that, without any toppings, with nothing more than the cashew coconut frosting or any other spread of your choosing. If I serve them for dessert on cozy tea or coffee afternoons, I’d rather them be a little sweeter. But for breakfast, on the other hand, I like them more when they‘re not so sweet. 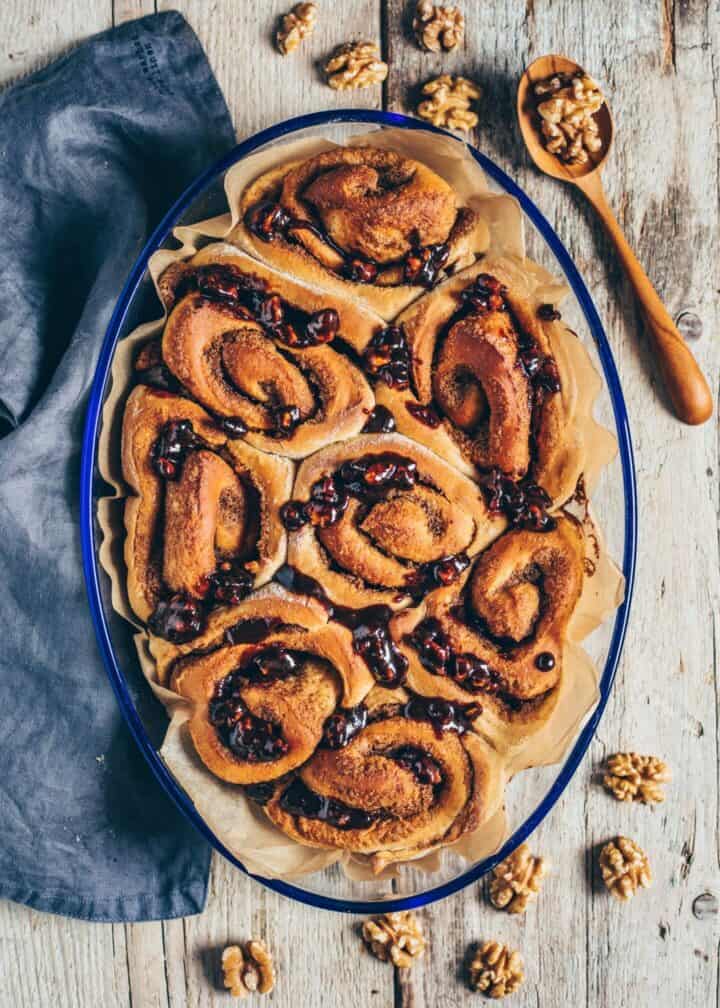 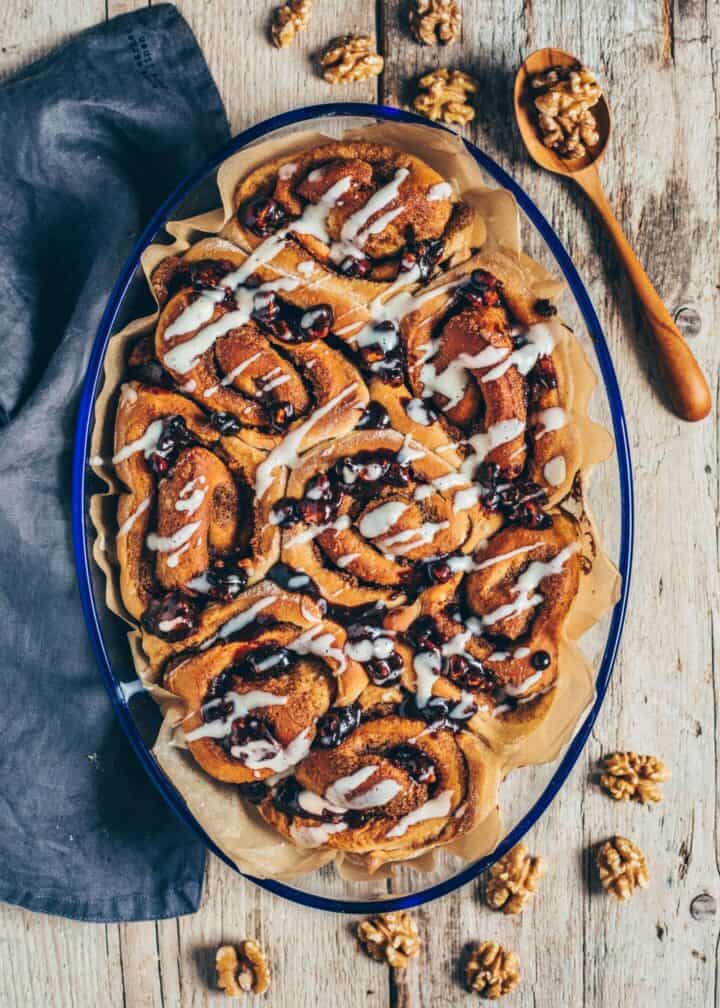 These best vegan cinnamon rolls are: 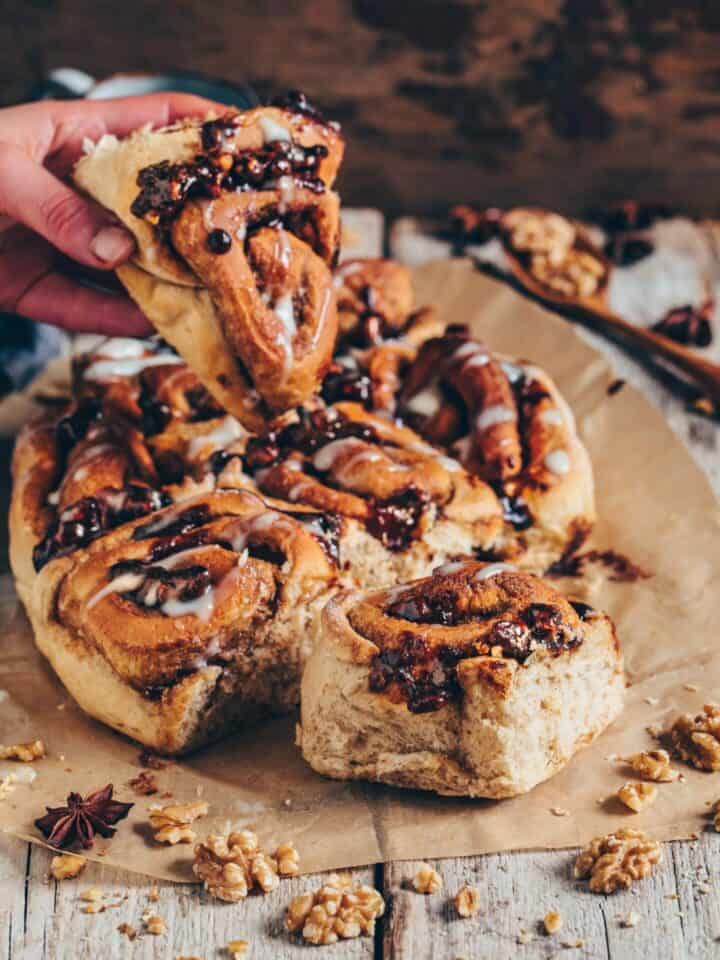 Use your favorite baking dish

Usually, vegan cinnamon buns are baked in a round or rectangular baking pan/ baking dish. However, this time I wanted my cinnamon rolls to look a bit different than most cinnamon rolls do, so I used an oval-shaped dish. Of course, you can use any baking dish you have on hand to make this recipe, and if all of the cinnamon rolls don’t fit in it, simply add the rest to another baking dish. That’s so easy!

For this recipe, you can use wheat or spelt flour, or even a gluten-free flour blend. However, keep in mind that you’ll get the best and fluffiest result by using regular plain all-purpose flour. If you’d like to use whole-grain flour, I’d rather recommend using a mix of whole grain and lighter flour, otherwise, your buns may get too dense. If you’re still looking for more Christmas recipes, you can check out my recipes for Apple Pie Roll-Ups, Vegan Apple Pie, or Apple Hand Pies. You will also find many other fall and Christmas recipes on my blog, also some that include pumpkin, such as my Pumpkin Cake with Cheesecake swirl. Just have a look around. I wish you a lot of fun with baking! 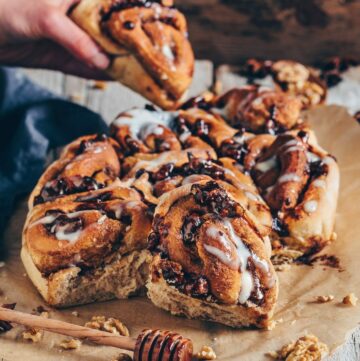 You do not have a fitting cake pan at hand right now? Try my Cake Pan Conversion Calculator!

Nutrition is calculated automatically and should be used as estimate.
Did you make this recipe?Mention @biancazapatka or tag #biancazapatka!

IF YOU HAVE PINTEREST, YOU CAN FIND ME HERE AND PIN YOUR FAVORITE PICTURE, IF YOU LIKE!

©Bianca Zapatka | All images & content are copyright protected. Please do not use my images without prior permission. If you want to republish this recipe, please link back to this post for the recipe. More info here. Thank you for supporting biancazapatka.com!

Disclosure for affiliate links with asterisk (*):
This page may contain affiliate links that earn me a small commission, at no additional cost to you. You can find more information here. 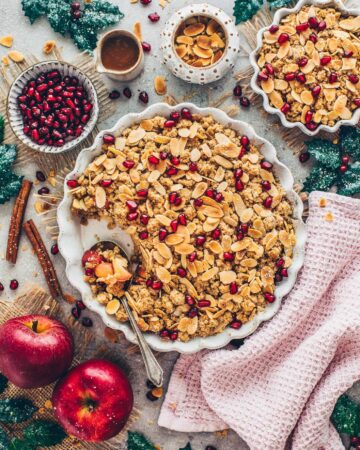 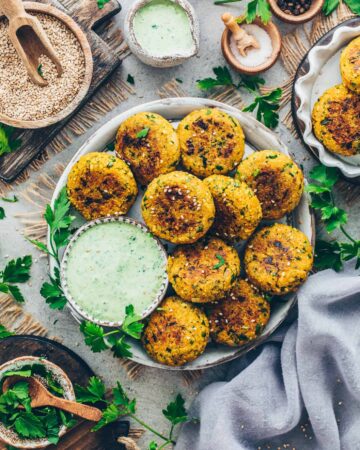 Hi! I’m Bianca, and welcome to my blog! I love to cook and bake and want to share that passion with you. Here you’ll find many delicious recipes which are mainly plant-based and easy to make for everyone. Read More… 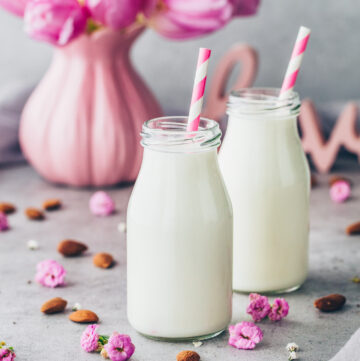 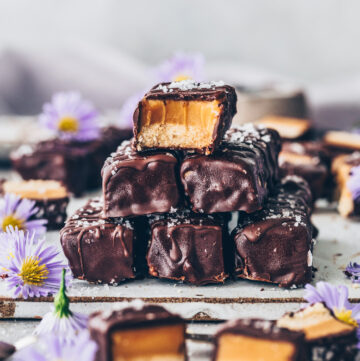 Hi! I’m Bianca, and welcome to my blog! I love to cook and bake and want to share that passion with you. Here you’ll find many delicious recipes which are mainly plant-based and easy to make for everyone. 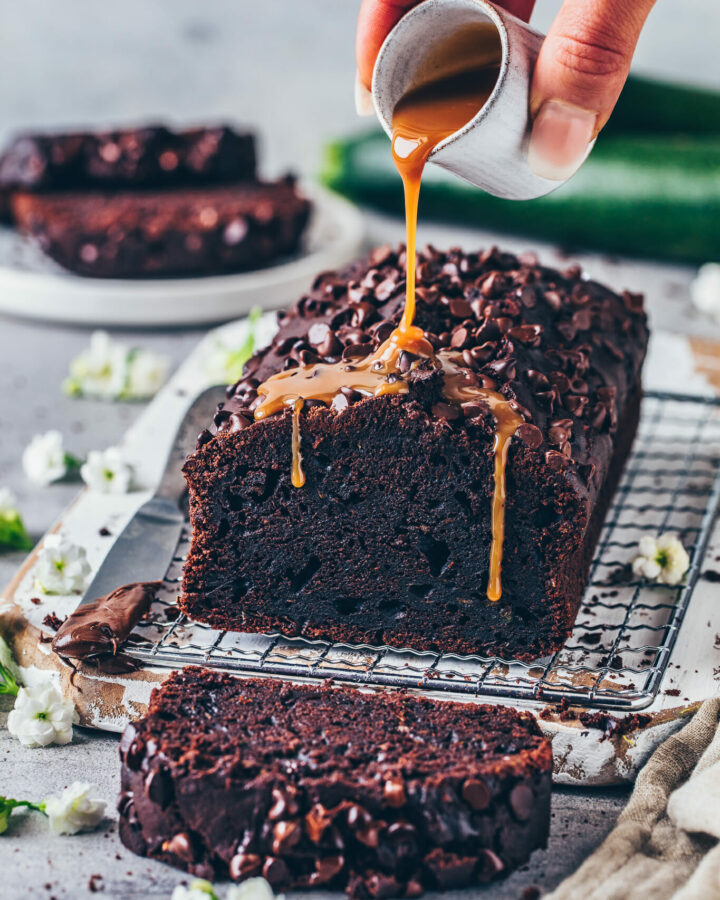 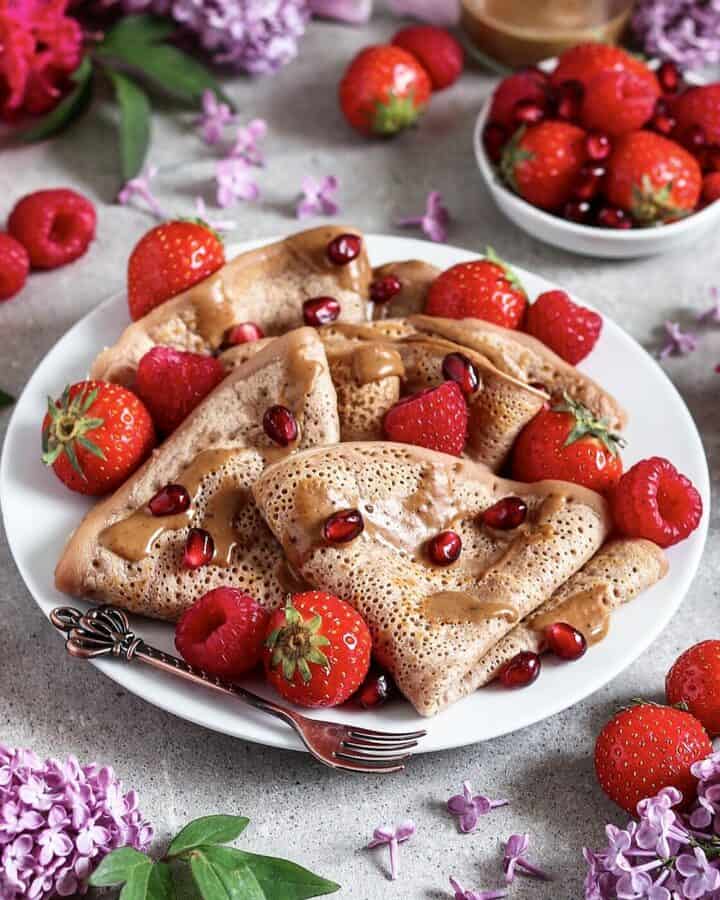 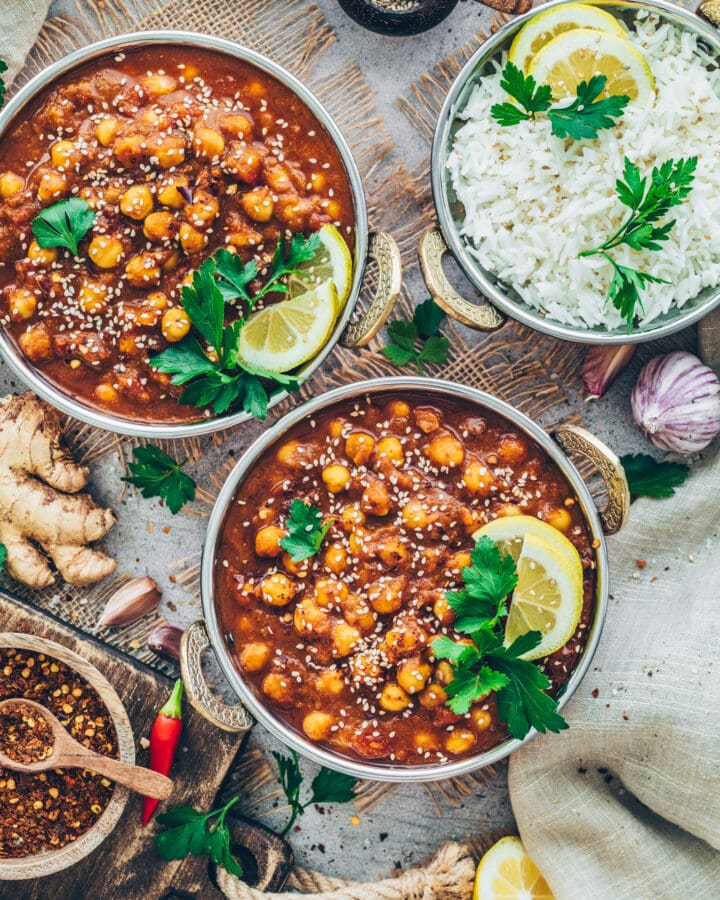 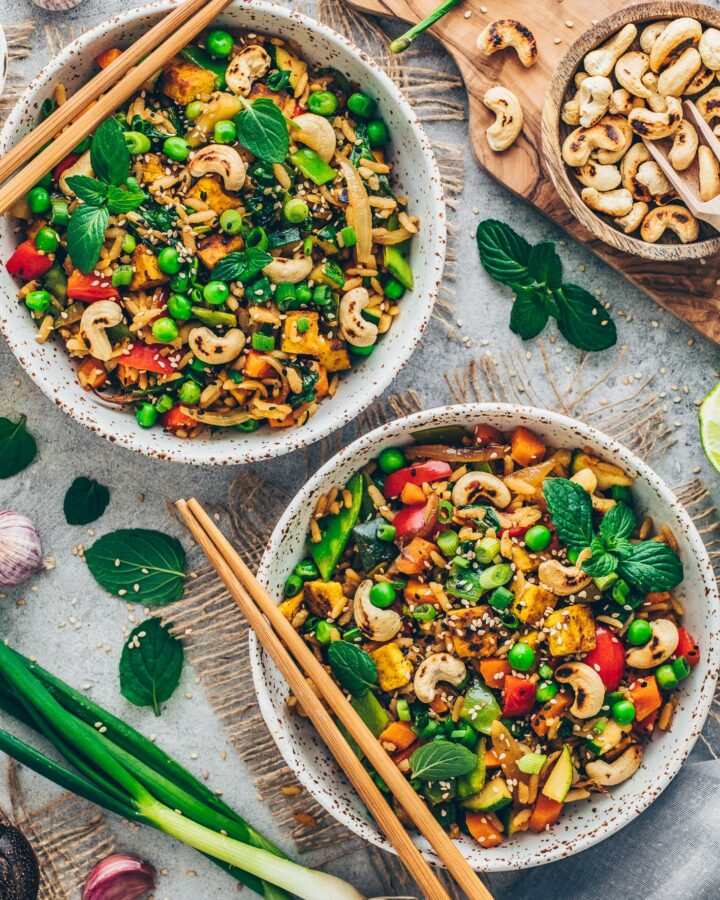